VANCOUVER, BRITISH COLUMBIA (November 8, 2011) -- Victor J.E. Jones, President and CFO of Great Quest Metals Ltd. ("Great Quest" or the "Company") (TSX VENTURE:GQ) (FRANKFURT:GQM), is pleased to announce that the Company has received an NI 43-101 compliant mineral resource estimate based on the first phase drill results within small portions of the company's 737 km2 Tilemsi Phosphate Project located in Eastern Mali, West Africa. The report from Jed Diner, (M.Sc., P.Geol.) provides an Inferred Mineral Resource estimate of 32 million tonnes at a grade of 23.4% P2O5 (at a cutoff of 5% P2O5) using a specific gravity of 2.1.

Inferred Resources:
Summary of the resources at various cutoff grades

The Tilemsi resource model is based on 176 drill holes completed in the Phase 1 drilling program carried out in the second quarter 2011 on the two initial target areas within the 737 km2 large project area. The phosphate bodies are stratabound, located near surface in gently rolling plateaus, and outcropping where the plateaus are cut by wide dry river beds. This should allow for a low strip ratio and minimal pre-stripping requirements. The overburden and phosphate material is soft unconsolidated silts and sand, which should be amenable to free digging, minimizing mining costs.

The report acknowledged that there is considerable additional untested exploration potential on the Tilemsi concessions, especially adjacent to the drilled areas, east of Tin Hina and SW of Alfatchafa. The report concludes that other areas within the concessions exhibit phosphate outcrops which have not been drill tested at all and which could increase the potential considerably. Continued exploration and drilling is recommended. The map given in Figure 4 of the report is presented below indicating the location of the drilling to date.

Mr. Ehud Levy, a Director of Great Quest Metal and international consultant on commercial phosphate deposit development stated, "The Company is pleased with the initial resource estimate for Tilemsi as it confirms the quality of the deposit and the potential for Mali as a source of high grade phosphate. We believe that the current inferred resource is conservative and that drilling of the target areas and other hills within the Tilemsi concessions will show greater reserves and increase the project potential."

The Company has mobilized geologists to the project site for continued sampling and geological reconnaissance. Eleven pits have been completed for a bulk sample for metallurgical test work and field work is in progress in preparation for drilling programs scheduled over the coming months.

Resource Estimation Methodology
The majority of the drill holes used were on the 320km2 Tin Hina Concession, with the area of the polygons used for the calculation of resource set at 6.75km2 for Tin Hina and 6.7 km2 for Alfatchafa, representing just over 13.4km2 of the expansive 320 km2 Tin Hina area in a total project area of 737 km2.

Based on the average thicknesses of the phosphate seams, weighted average grade of the intersections, and using a specific gravity of 2.1, the preliminary estimate of tonnage represented by the Phase 1 drilling is approximately 32.6 million tonnes of phosphate rock at a weighted average grade 23.4% P2O5 of high quality. Geochemical analysis of the phosphate samples indicates that the deposit is free of deleterious elements (Cd<1 ppm, U<10 ppm) but rich in Fe2O3 and Al2O3 (about 11% combined).

Based on the drill hole spacing and sample quality issues, the report classifies the resources as inferred. The Phosphate field was divided into two different areas: Tin Hina and Alfatchafa, each of which was modelled independently by seam modeling. An Inverse Distance Squared (IDS) algorithm was used to obtain resource estimates. A detailed statistical analysis was completed according to the geological model. Each element assayed was included in the analysis. A two dimensional (2D) estimate as defined by the ore layer surfaces was undertaken. The block model size was based on drill-hole spacing and thickness of the mineralised unit. The estimation of P2O5 for the main phosphate layer was undertaken using the IDS method. On Alfatchafa, presence of good variograms allowed calculation of resources using Kriging, while in Tin Hina, only IDS estimation was possible.

The statistical analysis comprised comparing the block average grades from the Inverse Distance Squared (IDS) to that of the raw drill hole data. The Kriged Alfatchafa model grades compare very well to the IDS model grades with less than 1% variation between the two models. The area is not structurally complex and so no geological losses were applied. 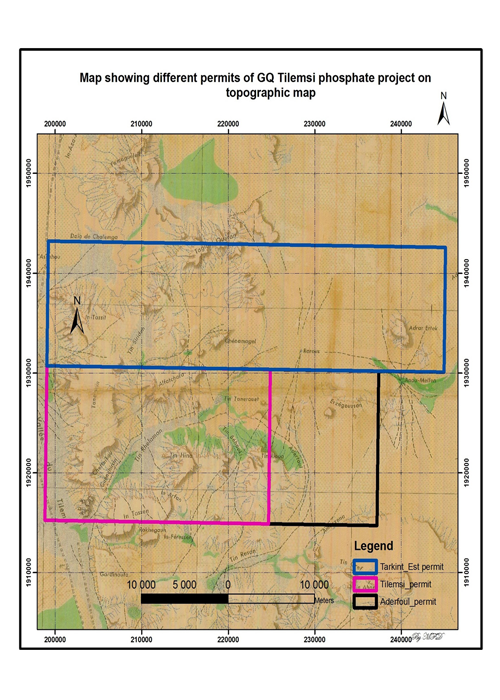 Figure 4: Overview of the Tilemsi project, with drill holes in red, ore polygons in yellow and the outline of license areas (black lines). See website for Report.

Qualified Person
Jed Diner (M.Sc., P.Geol.) is the Qualified Person responsible in accordance with NI 43-101 for the content, review and approval of this News Release. Mr. Diner completed his MSc in Applied Earth Science at Stanford University in 1983 and works internationally on mineral exploration and resource development projects. He has consulted on other Phosphate projects in Uzbekistan, Peru and Angola.