VANCOUVER, BC - John A Clarke, CEO of Great Quest Metals Ltd. ("Great Quest", "GQ", or "the Company")(TSXV: GQ; Frankfurt: GQM), is pleased to report the results of the Phase 2 exploration, geological and drilling work on the Tilemsi Phosphate Project. The Tilemsi project area comprises three concessions covering 1206 sq km in eastern Mali, near the town of Bourem, which is situated on the Niger River. The Phase 2 program included the following activities:

In addition, Phase 2 provided the bulk samples for phosphate test work now underway at the MINTEK laboratories in Johannesburg. These samples are part of the evaluation of Tilemsi phosphate for future project development. The work encompasses process options for mineral beneficiation, product granulation and solubility profiles of processed Tilemsi ores. The work also includes the evaluation of chemically upgrading the Tilemsi phosphates and the opportunity to produce traditional fertilizer formulations. Market and logistical studies have also commenced to fully evaluate the supply of Tilemsi phosphate both to the local West African agrochemical market and to the wider international markets. Initial chemical analyses by MINTEK demonstrates a low CaO/ P2O5 ratio of less than 1.33, which favors low cost beneficiation process options.

Tin Hina - Bulk Sampling Assays show 21% grade increase
As part of the Phase 2 program, eleven shallow RAB drill holes in the Tin Hina area from the Phase 1 drill program were twinned by surface pitting. This permitted visual geological and lithological examinations of the phosphate layer to be conducted. A 100kg bulk sample was taken from the phosphate layer in each pit and shipped to Bamako for preparation. Half (50 kg) of each bulk sample was sent to MINTEK, South Africa for metallurgical and processing analysis and a subsample from each pit samples was shipped to ALS Vancouver for XRF analysis. A comparison of results of the pit assay samples with their respective twin RAB hole assays from the Phase 1 drill program (Table 1 below) demonstrated a 21% increase in P2O5 grades in the pits (weighted average of 29.3% P2O5 in the pits vs. 24.2% in the RAB holes) but with narrower intercepts (1.21metres vs. 2.0metres, respectively). This indicates that the grades of Tilemsi phosphate are potentially higher by up to 5% P2O5 from the previously published values.

This comparison reflects the degree of sample dilution associated with the use of RAB drilling used to date on the Tilemsi phosphate deposits. To reduce sample dilution it is intended that future Tilemsi drill programs will use Air Core drill rigs.

Tarkint Est - Phase 2 Drilling
The Phase 2 geological and drilling program for phosphate in the Tilemsi project obtained very encouraging results, having achieved the goal of outlining the target areas for Phase 3 drilling on the Tarkint Est Concession as shown in Figure 1 below for the Chanamaguel (CM) target. This new area with high phosphate potential has been confirmed by surveys, mapping and drilling. Drill holes are shown in green and bulk sample locations are shown in black in Figure 1. Also in Figure 1, blue polygons outline boundaries of mineralized areas and the magenta polygons outline those areas with results above 28% P2O5. 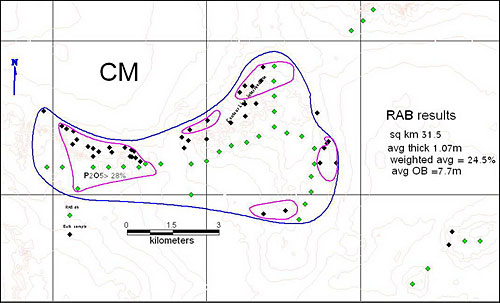 In Phase 2, 48 RAB drill holes were completed (total of 608 metres) by the Company's contractor, Salam Construction. The Phase 2 drill program broadly outlined an area of 30 sq km for future phosphate drilling at Chanamaguel. It demonstrated the occurrence of phosphate of good quality, 20%-31% P2O5 (Table 2 below), with an average weighted value of 24.5% P2O5 over average thickness of 1.07 metres at an average depth of 7.7 metres. The good stratigraphic continuity common in such sedimentary deposits, demonstrated elsewhere on this property by grid drilling suggests most, if not all of these 30 sq km are underlain by a phosphate bed. At a specific gravity of 2.0 an area of 1 sq km containing a 1.0 metre thick phosphate bed could represent up to a 2 million tonne potential.

Based on the testing of the 11 twin pits and RAB holes from the Phase 1 drilling, as described above, a significant increase in phosphate grade can be anticipated in future when less dilutive drill techniques are used.

Tarkint Est - Phase 2 Outcrop Sampling
The phosphate outcrops of the Chanamaguel area were also gram. A total of 21 bulk samples taken in this area provided a weighted average of 29.4% P2O5, over an average thickness of 0.43 metres. The narrow thickness of these outcrop samples is attributed to them having been taken from outcrops of partially eroded remnants of a thicker phosphate bed.

Summary of Tilemsi Phase 1 and Phase 2 Work Programs
Great Quest has successfully outlined extensive phosphate opportunities across its current Tilemsi license areas since commencing exploration on its 1206 sq km project in eastern Mali. Three major areas have been defined to date for continued resource drilling: Tin Hina, Alfatchafa and Chanamaguel, and additional potential targets have been identified for future work.

The three main areas drill tested to date are shown in Figure 2 below. The Tin Hina (TH) and Alfatchafa (AF) targets were drilled during the Phase 1 program and Chanamaguel (CM) was drilled during the Phase 2 program. Two further areas with potential are shown in Figure 2 as 'A' and 'B'. Blue polygons define boundaries of drill inferred mineralized areas. 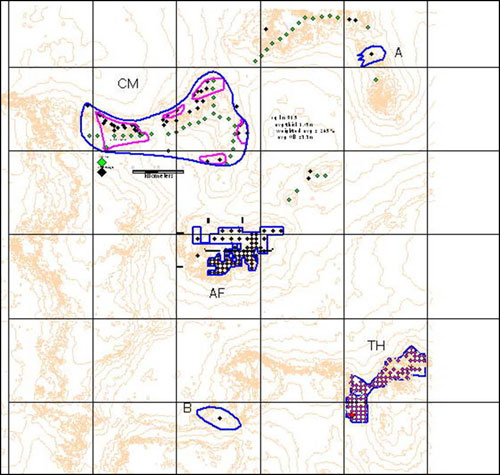 These results now confirm the extensive nature of the phosphate horizon across the Tilemsi project area, over distances of more than 25 km. The Company is preparing its Phase 3 program to include up to 1000 drill holes to cover some 30 sq km on Tarkint Est, 20 sq km as follow-on drilling on the Tin Hina and Alfatchafa areas, and additional exploration and pitting.

John Clarke, Interim President of Great Quest, commented "Great Quest is very pleased with the results of the Phase 2 drilling program at Tilemsi. We plan to look more closely in Phase 3 at those areas within the Tilemsi licences that have been shown to demonstrate increased potential for good quality phosphate. With phosphate grades from the bulk sample pits having an average grade of 29.3% we believe the Telemsi Project has the potential to hold world class high grade phosphate deposits very similar to Moroccan phosphate deposits"

Qualified Person
Jed Diner (M.Sc., P. Geol.) is the Qualified Person responsible in accordance with NI 43-101 for the content, review and approval of this News Release. Mr. Diner completed his M.Sc. in Applied Earth Science at Stanford University and works internationally on mineral exploration and resource development projects. He has consulted on other phosphate projects in Uzbekistan, Peru and Angola.