VANCOUVER, BRITISH COLUMBIA (October 23, 2012) - Joel Jeangrand, President and CEO of Great Quest Metals Ltd. (the "Company") (TSX-V: GQ, FRANKFURT: GQM) is pleased to announce that an updated resource estimate on the Tilemsi Phosphate Project has resulted in an increase of 17.4 million tonnes of inferred phosphate resource at an average grade of 25.9% P2O5. At a 10% cut-off grade, the updated resource estimate represents a 53% increase of the Tilemsi phosphate resource reported by Great Quest in the NI 43-101 Technical Report filed in August 2012. Together with the previously estimated resources on the Alfachatfa and Tin Hina, two other areas within the Tilemsi license, the total inferred resource now stands at 50 million tonnes with an average grade of 24.3% P2O5 (at 10% cut-off).

This technical report entitled "Tilemsi Phosphate Project, Mali - Tarkint Est Area. Resource Estimate" (the "Report"), dated October 17, 2012, will be available shortly on SEDAR and on the Company's corporate website www.greatquest.com. The Report is based on the second phase of the Company's drilling program conducted in the fourth quarter of 2011 on Tarkint Est, one of Great Quest's three phosphate licenses (see Map 1). 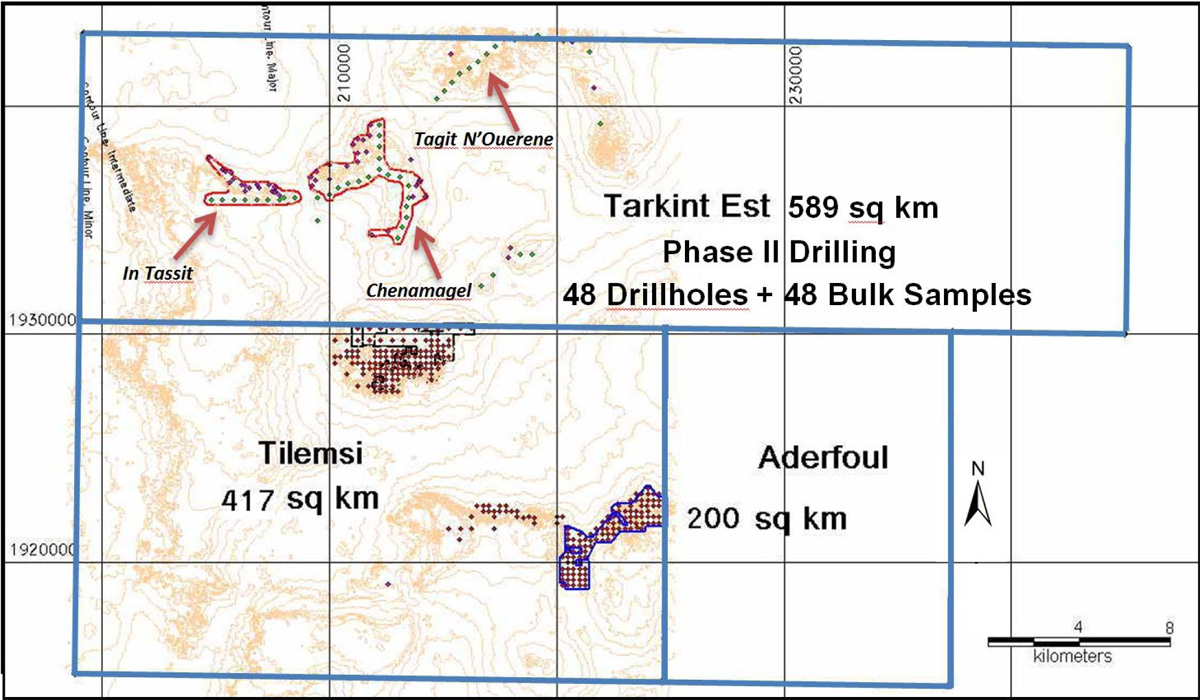 Property Description and Location:
The Tilemsi Phosphate Project comprises the contiguous Tilemsi, Tarkint Est, and Aderfoul licenses and covers a land package of around 1,206 sq. km. The Tarkint Est license covers 589 sq. km and hosts the target area of the late 2011 drilling campaign. The drilling tested 3 large plateau areas - the western In Tassit, the central Chenamagel and the eastern Tagit N'Ouerene.

Analytical Procedure:
This mineral resource estimate of work done to date on Tarkint Est is based on the data derived from 608m of Rotary Air Blast (RAB) drilling in 48 drillholes and 48 bulk samples, taken from outcrops and at shallow depths from trenches and excavations. All drilling protocols and geological sampling of the program were established by Mr. Jed Diner, MSc P.Geol. Drill cuttings were sent to ALS Bamako Minerals Laboratory and to ALS Laboratory in Vancouver, BC.

Great Quest President and CEO, Joel Jeangrand, commented:
"This latest resource report confirms that the Tilemsi deposit is graduating to become a world-class deposit, thanks to its increasing size and potential for low extraction cost. Given the extensive land surface of our project and the work done so far, we can only expect a substantial upsize potential on the project. An inferred resource of 50 million tonnes will greatly benefit the findings of our Preliminary Economic Assessment (PEA), expected to be completed in the fourth quarter of 2012."

Exploration and Development Initiatives:
The Company's exploration and development program on Tilemsi, designed to expedite the path to a production decision, includes of the following components:

The readers are cautioned that:

Qualified Person
Mr. Jed Diner, MSc. P.Geol., a Qualified Person as defined under NI 43-101, completed the mineral resource estimate and has reviewed the technical information presented in this release. Mr. Diner completed his MSc. in Applied Earth Science at Stanford University in 1983 and works internationally on mineral exploration and resource development projects. He has consulted on other phosphate projects in Uzbekistan, Peru and Angola. The resource estimate complies with the NI 43-101 for the Standard of Disclosure for Mineral Projects as adopted by the Canadian Securities Regulators.

The Company is also pleased to announce the appointment of Dr. Robert Rennie as Company Advisor. Recently retired as President and CEO of Spur Ventures, Dr. Rennie has over 27 years' experience in the fertilizer business. He began his career as a researcher working for the joint division of the FAO/IAEA of the United Nations and Agriculture Canada before being recruited by Esso Chemical to develop new and proprietary fertilizer products. He then rose to the position of Vice President International for Agrium, where he was responsible for the construction of the world's largest ammonia/urea plant and Agrium's retail fertilizer network in Argentina. He is Chairman of the Alberta Value Added Corporation (AVAC) and co-chair of ABIC 2013, the Agricultural Biotechnology International Conference. Dr. Rennie brings his valuable insight and experience to the preparation of the Company's PEA and its ongoing work on the Tilemsi Phosphate project.

About Great Quest:
Great Quest Metals Ltd. is a Canadian mineral exploration company with assets in Mali, West Africa. The Company is focused on developing the Tilemsi Phosphate Project, encompassing 1,206 km² in eastern Mali. The Company also holds several gold concessions in the productive Birimian gold belt in western Mali. Great Quest is listed on TSX Venture Exchange under the symbol GQ, and the Frankfurt Stock Exchange under the symbol GQM.

Neither the TSX Venture Exchange nor its Regulation Services Provider accepts responsibility for the adequacy or accuracy of this release. The statements that are not historical facts and are forward-looking statements involving known and unknown risks and uncertainties could cause actual results to vary materially from the targeted results. We seek safe harbor.