On May 1st 2015, the company filed an updated Preliminary Economic Assessment (PEA) on the Tilemsi Phosphate Project (TPP). The PEA details the 2 phases of the TPP.

The plan for the commercial pilot plant envisages the mining and processing of 40,000 tonnes of phosphate rock per year for 12 years. With the processing plant will be located in Dogofry, 1024km southwest of the Tilemsi mine. The purpose of building the pilot plant is to demonstrate the technical and economic viability of granulated phosphate in the local market. A site has been identified in Dogofry to house the plant and detailed engineering for the plant has been completed.

Dogofry is an agricultural community located in the Office du Niger irrigation area of Mali. The French colonial administration constructed a system of canals that were originally purposed for the cotton industry, however, the area is now used for the cultivation of rice. The water in the canal system is used to cultivate 100,000 hectares of agricultural land and approximately 320,000 tonnes of rice are grown each year representing 40% of total Malian production. Additionally, there are also nearly 6,000 hectares of sugarcane grown in the area.

Placing the production facility in the heart of this region will enable the company to have direct exposure to the farmers in the region, with no local competition.

The plant will beneficiate the rock from 24% the grade in the ground, to produce 25,200 tonnes of high grade 35% P2O5, and 10,400 tonnes of medium grade 27% P2O5, with 4,400 tonnes of material being of low phosphate content. The high and medium content material will then be toll blended with urea (nitrogen), and potash that are imported by the company's distribution partners to produce different recipes of NPK products depending on the needs of the fertilizer consumers. It is estimated that 96,691 tonnes of NPK blend will be produced per year.

The distributors are well established fertilizer importers and resellers in Mali, handling all of the intricacies of local distribution.

If market demand and off take agreements are sufficient after one year of full operation, the company will press forward into larger scale production that will be detailed in Phase 2 of the project. 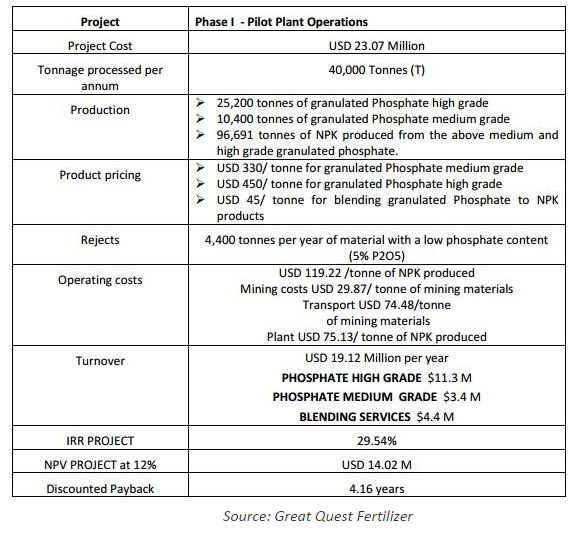 The second phase will be located 3km to the south of Bourem, 95km from the Tilemsi mine. It will consist of the construction of phosphate beneficiation and granulation plant along with their associated infrastructure and utilities.

The targeted 37.9% IRR (55% equity IRR) is significantly more appealing than many other projects in the junior mining sector. That withstanding, the large amount of capital at risk in the second phase of the project needs significant consideration, given the location. The success of the pilot plant will mitigate the risk posed to second phase.