VANCOUVER, BC -- Willis W. Osborne, President of Great Quest Metals Ltd. (TSXV: GQ; Frankfurt: GQM), is very pleased to announce the results of sampling and mapping on the 24 square kilometre Sanoukou gold concession, located in Western Mali, south of and adjacent to the Company's previously sold Kenieba gold concession. Because of a lack of outcrop, mapping and sampling was mainly limited to areas of orpaillage where the local miners, or orpailleurs, had dug pits in the search for gold. Sampling was primarily confined to "reject" material which had been dug out of the pits but discarded in favour of higher grade material which was typically crushed and panned by the orpailleurs to recover the gold. This news release reports on results from 212 of the 248 samples taken.

The method of mapping, described above, has defined at least 8 felsic dykes, megascopically described as albitite, within the concession. Below is a table with results from grab samples taken along various lengths of the dykes from east to west (a map is attached):

These results are considered to be very positive especially considering the fact that the material sampled was reject material, however the results must be confirmed by drilling. Most of the samples consisted of albitite, albitite with quartz veins, saprolite and saprolite with quartz veins. The Dansilato and Findikalato dykes were traced southwest to a laterite hill where the orpailleurs were unable to dig their pits. The dykes, however, continue 565 metres to the south on the other side of hill. Seven samples taken over a length of 4,021 metres from one of these dykes, south of this hill and north of the town of Sanoukou, averaged 6,138 ppb or 6.14 g/t gold. Also, north of the town of Sanoukou, 5 dykes occur within a width of 445 metres.

The mapping and sampling program has established multiple drill targets. The timing of the drill program will depend on the availability of a drill and the start of the rainy season. The objectives of the program will be to determine the grade and continuity of gold in the various dykes, test for additional dykes and to determine whether gold occurs in the metasediments surrounding the dykes.

Great Quest has an option to acquire a 100% interest in the Sanoukou concession from the Owner, subject to a 5% carried net profit interest, by paying $137,000 over 4 years.

The Sanoukou concession is south of and adjacent to the Company's previous gold concession which was recently sold to Avion Gold Corporation for $4.35 million in cash and shares. The Great Quest team previously established a NI 43-101 compliant mineral resource of 324,000 ounces of gold at a grade of 3.92 grams per tonne in quartz veins mainly within 2 albitite dykes in the Djambaye 2 gold zone. It is thought that some of the dykes on the Kenieba concession extend south into the Sanoukou concession.

Samples were processed by ALS Chemex in Bamako, Mali. The samples were crushed, split and pulverized. Thirty grams from each sample were tested for gold by fire assay-AA. All samples with initial results over 10,000 ppb had two additional determinations by gravimetric, 30 gram fire assay. Carl G. Verley (P.Geol), the Qualified Person pursuant to NI 43-101, has reviewed the contents of this news release.

Neither the TSX Venture Exchange nor its Regulation Services Provider accepts responsibility for the adequacy or accuracy of this release. The statements that are not historical facts and are forward-looking statements involving known and unknown risks and uncertainties could cause actual results to vary materially from the targeted results. 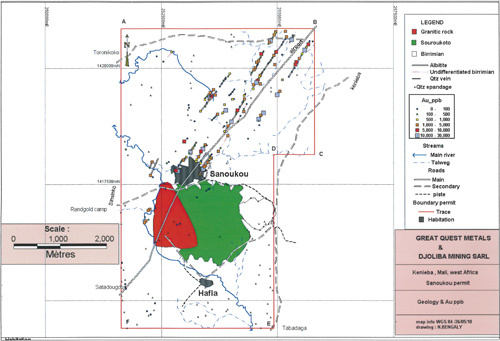